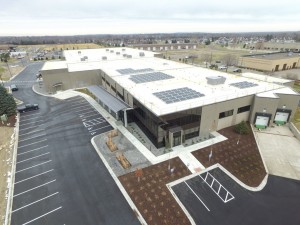 TEKTON client Uponor will begin construction on a $17.4 million expansion in Apple Valley, MN later this spring. It is a much-needed addition to increase the manufacturing capacity to meet global customer demand for its PEX plumbing, radiant heating/cooling, hydronic piping, pre-insulated pipe and fire sprinkler systems.  This tenth expansion for Uponor since beginning its operations in Apple Valley in 1990 is a 58,000 square foot annex, adding to the existing 405,000 square foot complex, with completion expected in January 2018. This expansion will create a significant number of new jobs, raising the total employee population to around 700. The most recent project was completed in 2016 and included an 88,000 square foot, $18 million expansion.

“These are exciting times at Uponor – and the building industry – as we continue to experience significant growth in both commercial and residential construction; and it’s an exciting time for our partners,”said Bill Gray, Uponor North America’s president, in a statement.

Uponor’s North American headquarters in Apple Valley is joined by a distribution and resin-receiving facility in nearby Lakeville, MN. Beginning in mid-May, the company’s technology group will move to an 8,500 sf leased office space next to its manufacturing annex. The Twin Cities metro area footprint will total 738,000 sf.

Last fiscal year, Uponor generated $337 million in sales in North America. In the first quarter of this year, the company reported sales of $83.5 million. Uponor’s decision to expand again in Apple Valley was partly due to the successful cooperation of both the State of Minnesota and the City of Apple Valley and their willingness to provide an attractive business climate for Uponor’s continued growth.

Uponor will celebrate its 100th anniversary in 2018, kicking of the celebrations with the completion of this impressive expansion.